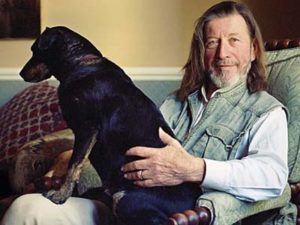 Jan Pieńkowski is a household name to children of more than one generation. He came to England from his native Poland together with his parents at the end of the Second World War, when he was ten years old. Jan was educated at Lucton School, Barnsley Grammar, The Cardinal Vaughan, London and Kings’ College, Cambridge, and has been devoted to this country ever since. At Cambridge he developed artistic skills by designing theatre posters for university productions. After taking a degree in English he started his artistic career in advertising, greeting cards and drawing live on BBC television. He was soon discovered by book publishers and it was telling stories in pictures that became his life’s work. Winner of the Kate Greenaway Medal for illustration (twice), Jan is best known for Haunted House, his pop-ups and the Meg & Mog series, created with Helen Nicoll. For the very young, he has written and illustrated the Nursery Books in bold and brilliant colours. Jan has recently finished the pictures for A River of Stories, an anthology of Commonwealth stories, which he had the honour of presenting to the Queen in a private audience. His new book The Glass Mountain – Tales from Poland (Walker Books and Candlewick) is done entirely in traditional Polish style with scissor-cut paper, echoing stories told him as a young boy in war-time Poland when books were scarce. Jan has travelled widely in Europe, the Americas, Asia, the Far East and Australia, often to work with publishers, research new books or to see one of his books being printed. He carries a sketch book everywhere he goes and has filled about 250 of them. He uses his sketches as groundwork for new publications. His theatre work includes designs for the Arts Theatre Cambridge, the Almeida Theatre London, Disneyland Paris, Royal Opera House Covent Garden and the Kremlin Palace Theatre Moscow. Jan appeared at a BLS event in 2010 entitled ‘Sacred and Profane’ and has designed our eye-catching brochure for 12 years and a number of our posters. To view visit the Gallery (Posters) page on our website. Jan works at home in his attic studio on Barnes overlooking the river Thames. He hears the rain – and sometimes hail – on the skylights and from the windows he watches the blue sails of the dinghies racing up and down the river.