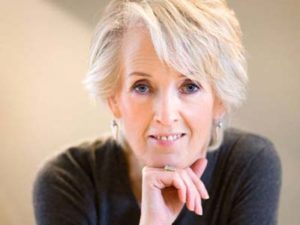 Joanna Trollope has been writing for over thirty years and is well known for her enormously successful contemporary works of fiction.  She has been described as one of the most insightful chroniclers and social commenters writing fiction today.

Born in her grandfather’s rectory in the Cotswold village of Minchinhampton in December 1943, Joanna says: ‘Being born somewhere with a strong local sense, like the Cotswolds, gave me not just a sense of rootedness, but a capacity to value landscape and weather and the accessible richness of community life.”

Joanna spent her school days in Surrey, but by her own admission, Joanna is not someone who loved her schooldays. ‘I only really started to enjoy education when I got to university. No school can be blamed, however, it was more my childhood and adolescent sense of being an outsider, of not belonging (a very formative sense, I now know, for being a writer) that made me miserable at a time when 99.9% of children long to conform. But, I was very well taught, however, and I think I sensed this, even then.’

After winning a scholarship to Oxford University, Joanna joined the Foreign Office and then became a teacher of English. She began writing ‘to fill the long spaces after the children had gone to bed’ and for many years combined her writing career with working as a teacher.  By 1980, Joanna became a full-time author. ‘My first novel was written when I was 14, all about myself, of course (it is now kept under lock and key in case my children find it…) I suppose I wrote it for the same reason that I still write – to communicate. I don’t think we should ever underestimate the power of story – story is how we negotiate with each other, how we build up relationships, how we learn. And nothing is so fascinating as good narrative – nobody of any age can resist What Happens Next …’

Joanna still writes longhand and is happy to write almost anywhere – an airport departure lounge, a country kitchen table, or the quiet, west-facing study in her London house. ‘I often write at an ordinary table – often in my kitchen and have not succumbed to the computer, so everything is handwritten. I start, as you guessed, with an emotional situation which grows into a story.  Then I choose a cast of characters, then I decide where they are going to live.  I will plot the first five or six chapters of a book quite minutely – and then I will plot the end so I know where I am going, but I do not know quite how I am going to get there which allows the book to develop organically – as life does!’