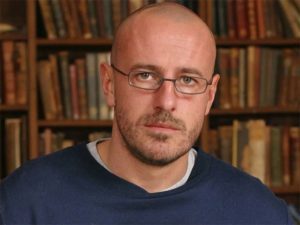 Patrick Neate (born 1970) is an award-winning British novelist, journalist, poet, screenwriter and podcaster. He was educated at St. Paul’s School in London and Cambridge University. He spent a gap year in Zimbabwe and has since returned to Africa on many occasions. He drew on his gap year experience in Musungu Jim andthe Great Chief Tuloko.

His books to date include Musungu Jim, Twelve Bar Blues, London Pigeon Wars, Where You’re At, City of Tiny Lights, Culture is Our Weapon, and Jerusalem.

In 2000 Patrick won a Betty Trask Award for his first novel, Musungu Jim. For his second book, Twelve Bar Blues, he won a Whitbread Award and the Prix de l’inaperçu in France and in 2005 he was awarded the NBCC Award for Criticism for his non-fiction book about hip hop culture, Where You’re At. He has also been shortlisted for the Authors’ Club Award, the L.A. Times Book Award and an Edgar Award (the Mystery Writers of America Awards).

Patrick wrote the screenplay for the film The Tesseract, adapted from the book by Alex Garland and his longform poem Babel was transformed into a physical theatre piece by choreographers, Stan Won’t Dance, in 2010.

Patrick’s work has been published in most major UK newspapers and magazines, widely anthologised and broadcast on radio and television.

A passionate supporter of literary diversity, Patrick founded Book Slam with Ben Watt (from Everything But The Girl), the UK’s best storytelling salon, where writers, poets and singer-songwriters perform in a nightclub environment.

Patrick spoke at a BLS event in its inaugural year (2004) on the ‘Birth of a Novel’.